Tower Cinema can be found within Tower Arcade 111 Lumley Road just across the road from the Skegness Clock Tower. 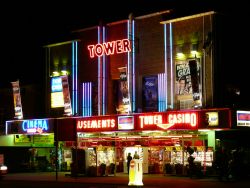 The horrible atmosphere of the Tower Arcade amusements brings down the tone of Tower Cinema a lot. I have to confess that I did prejudge Tower Cinema by the look of the amusements arcade and as a result it took two years to decide to take a trip to the cinema in Skegness. I assumed that it would be an uncomfortable disappointing rip off since that is the impression and experience you get at Tower Arcade amusements. If it wasn’t for doing this site I would never have gone.

Tower Cinema has two big screens, the cinema seats are modern, comfortable and clean. The screen room was tidy and well kept and you can buy your usual sweet treats like fresh popcorn.

On the outside Tower Cinema looks small, but I was surprised that it actually has two screen rooms with a hundred or so seats in each! The fire exit signs are clearly visible and it had a beautiful molded ceiling.

When we went in I spent several minutes dashing around the machines trying to find the cinema part in Tower arcade. I eventually went over to the glass booth where you get change in the arcade and had to shout over the loud machines for our tickets for one child and one adult.

The woman behind the glass shouted back the time the film started ? (arcades are so noisy). I tried to ask were to go, what to do etc…, but she turned her back leaving me with no idea where to go! I spotted a lady with children just standing near some steps, so since the staff didn’t help I asked her if she knew where to go.

It turns out that you do line up near these stairs, so you pay your money at the glass change booth and queue at the stairs.

The screen rooms are up two flights of stairs and there is no access to a lift so it is NOT disabled friendly, also in the screen room there were steps down the main isle, there were seats at the very back, but it means the disabled would get no choice where to sit if they managed to enter the cinema.

Tower cinema says it’s trying to sort out these problems for the future so if you are a wheel chair user or have difficulty climbing stairs I would suggest calling Tower Cinema, the phone number for the cinema is an automated one so I would give Tower Arcade a call.

I found the staff with the exception of the cinema usher upstairs who was quiet nice and friendly to be unhelpful, ignorant, not engaged with customers and unfriendly!

The film we went to watch was opened 20 minutes late! When they eventually decided to open the cinema a miserable looking woman pushes passed us with not a word, she took down the rope partition and disappears up the stairs. We were then left another 10 minutes, no one in the arcade glass booth tells us what’s going on, they all just ignore us and continue counting and sorting the coins for the machines (well done for making us feel special!) we all were left waiting with no explanations, wondering what was going on.

We didn’t get an interval in the middle of the film because of how late the film started. I’m just glad my son and I didn’t need a toilet break resulting in missing part of the film I’d payed to see, it also meant we couldn’t buy sweets in the interval.

Don’t sit at the front of the Cinema the seats are to close to the screen and I got a creek in my neck and the screen seemed blurry. Watching our movie from that distance made my head hurt for the first 30 minutes of watching the images on screen fly past me, so I would recommend sitting at the back.

There was also another problem Tower cinema is a non smoking Cinema like all other enclosed spaces now are in Britain, but I smelt cigarette smoke at least twice for a minute or two at a time, I don’t know whether it was a member of staff, a customer or coming from the arcade, but this caused my son who suffers from asthma distress.

Since the smoking ban came into force it means my son at last can use enclosed public spaces. The fact that there wasn’t a member of staff in the screen room while the movie was on shows a failing on tower cinema’s part to allow this to happen, as well as a health and safety issue.

My conclusion of Tower cinema is that it needs to be a cinema with dedicated and friendly staff so that customers can get the feeling of a good day out at the movies, instead of feeling like your an inconvenience and your cinema experience comes secondary to the grubby arcade!

Tower Cinemas priority is definitely the Arcade and not the Cinema, which is stupid since a family of 4 going to the Cinema gives them is an instantaneous £20 plus and that’s not including Sweets etc…, but a family just using Arcade usually wastes a fiver on the machines.

Tower Cinema needs to be revamped it should be a cinema, I would like to see it have maybe a 50’s theme diner, family entertainment and fun activities for families to do together and not attached to the arcade and shabby shop fronts, it gets lost amongst the din :-( which is a pity since it is a really nice Cinema with it’s original decorative ceilings and cosy atmosphere

You might give it a higher rating if you can ignore the fact that it’s not disabled friendly, there’s no clear signs of where to go, you can turn a blind eye to the rude staff and the cigarette smoke coming from either the staff or the customers poisoning your kids while they innocently watch the movie you paid good money to see, then you might give it a higher rating than I have, but for me the failings ruined the whole cinema experience.

I might have given it 8/10 stars if I was just going on the cinema area, it’s a nice little independent Cinema, that’s at all bad, BUT it’s the little things that are important that make a great day out and Tower Cinema failed BIG time, so my overall rating for Tower Cinema is a DISMAL 3/10 STARS and I’ll never go again!!