Church Farm Museum is to take part in the SO Festival.

Nose Art will be taking place at Church Farm, what is nose art I hear you ask :)

Nose art is paintings that airmen painted on the cockpits of there plains during world war II. 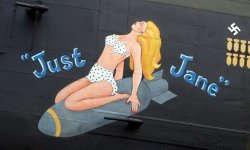 The Nose art typically would be of sexy semi naked women or a hard hitting political statements portrayed in a comical cartoon, these would help boost moral and for the crew to identify themselves with there machine through artist impression, sticking it to their enemy in a stand of defiance.

Imagine being a German fighter pilot in a dog fight and a picture of a sexy woman pulls up at the side of you then shoots you down.

Nose Art was used to express the way the pilots and crew felt during a very difficult period in history.

The most iconic cockpit design was Just Jane, who famously adorned the nose of the Lancaster Bomber.

The Nose art to feature during the SO Festival are by competition winners, all the winners are artists aged 6 – 22 years old who designed images to go on the noses of aircraft as part of an aviation competition ran by Lincolshire county council.

Church Farm will feature the winning Images as part of the Skegness SO Festival 2011, there will be 24 designs featured in the art instillation.

They will not be on actual air craft the designs, the kids noses aret will be displayed on aluminium sheets which is as close to drawing on the real thing as you can get and is a lot easier to walk around with :)

The nose art will be arranged around church farm, it’s the first time church farm will be taking part in the Skegness SO Festival.

Church Farm can be found on

There’s a has a Small Car Park at Church Farm for visitors.