At last new for 2009 Skegness Fantasy Island has introduced a wrist band scheme like Bottons Pleasure Beach has had for years.

The price of the Wrist bands was very reasonable, we paid £12 for an off season adult ticket and £6 for a child off season ticket.

Fantasy Island is a great Skegness Attraction full of fun and plenty to do with a huge indoor and outdoor market, pubs and restaurants with live entertainment to watch, kiddies shows there’s events, go karts and crazy golf and traditional funfair games like hook a duck that you can pay extra for.

We found Fantasy Island to be good Skegness attraction with plenty to do.

Skegness Fantasy Island isn’t as big as other Theme parks, but they have crammed plenty of entertainment into this medium sized modern theme park with plenty of rides for everyone, with Big Thrill Rides like Roller Coasters for the brave as well as slower paced attractions for cowards like me :-) 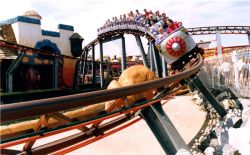 I’m not that into Theme parks, I go for the kids. A good day for me is a quiet walk in the great Lincolnshire countryside like at Gibraltar Point Nature Reserve or an uplifting fun filled evening at the Skegness Embassy Theatre letting my hair down seeing a great family show, but I enjoyed Fantasy Island theme park more than I thought I would. Normally I get a bad migraine after visiting a theme park with all that rushing around trying to get on every ride possible covering a huge amount of land just getting from one ride to the other.

Fantasy Island was a breath of fresh air, because it’s free to get in, meaning if you don’t want to pay for a wristband and just experience the odd ride, you could break up your visit to cover different days. You could do the rides one day, the market another and have a blast spending the rest of your cash on arcades and funfair stalls or an evenings entertainment in the bars. Fantasy Island has a lot to suit most tastes, it’s obviously not perfect and if your the type of person who likes a taste of sophistication Fantasy Island is probably not the place for you (who visits Skeggy for sophistication anyway?).

Skegness Fantasy Island theme park is loud and proud, although it’s a theme park it does have a traditional funfair feel to it full of garish colour, lights and loud music, so not for the faint hearted, it fits in well with the Great British Seaside Holiday experience that is Skegness. 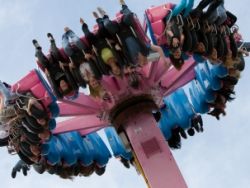 Fantasy Island during the summer holidays are open at night, so your fun can continue into the night.

I’m not the most adventurous when it comes to theme parks (my son is but he was sweet enough to stick with me) so I didn’t dare venture onto the thrill rides, asking me to go hurtling down a 100ft drop at 1000gs with my cheeks being left at the start of the ride waiting for me to reach them at the end of the ride is not my idea of fun, you say to me that’s fun I will quickly tell you were to get off :-). The rides I went on (mainly the family rides) suited me just fine and there was a decent diversity.

The most bizarre ride I have ever been on has to be Techno Jump it’s a weird feeling as your bounced this way and that on hydraulic arms, I don’t think I’ve ever prayed so much in my life I had lots of people standing around watching me and laughing I think they were waiting to see what would come out of my mouth next :-) totally cool.

I also liked the Crazy Mouse Ride. I was trying to appear brave as I looked around and saw very small kids going on this ride with their parents, I calmly sat in the ride and as we are climbing a 20ft track my son decides as a joke! to tell me how many people had died on this ride and plummeted to their imaginary deaths in gruesome detail, kids they know how to make you feel all warm and fuzzy inside :-) it is a great ride and one of my favourites at Fantasy Island.

Fantasy Islands wristbands cost more on busier days with high season and bank holidays being more expensive for the day bands, phone before you go or visit Fantasy Islands website for more details on prices. Fantasy Island is free to get in which means you can come and go though out your visit as you please.

The wrist band are bar-coded which you pass under a scanner to open a turn style to get onto the ride which I’ve never seen before, normally you flash your wristband at the ride attendant to get on a ride at other theme parks we’ve been to. A couple of people at Fantasy Island where having problems with their wristbands, looked like they had got them wet, the ride attendants acted swiftly when there was a problem with the bands letting the people through manually if need be.

You can still buy individual tokens to go on the rides, you don’t need a wrist band to enjoy a day at Fantasy Island, so if you’ve only got a few minutes and want a quick ride you can still pay as you go.

If you don’t like rides at all and prefer shopping there is the market which is massive, it’s the biggest one I’ve ever seen. Markets aren’t my thing, but my son and I had a gander around while we took a break from all the spinning, and falling. There’s loads of stalls people who enjoy markets could happily spend a full day wandering around the market at Fantasy Island. 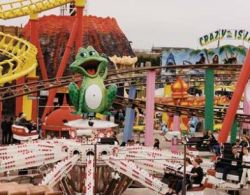 One the day we went it threw it down yet it didn’t ruin the day, the rides were opened up quickly once the rain stopped and there is plenty to do if it rains at Fantasy Island with the indoor market, bars, arcades and undercover rides.

If the English weather doesn’t spoil your day you know it’s a good attraction. One thing I notice was Fantasy Island supports a lot of kiosks where you buy food, some of the kiosks had seating outside to consume food, but others don’t and none are undercover which means eating food can be very chaotic. Add that to bad weather and it could turn out to be the worst part of a day at Fantasy Island, that didn’t happen to us and my son and I went to Fantasy Island on a quiet day before the school holidays, but a lady at the Mc’Donalds kiosk told us there is a queue all the way down the street on both sides full of people wanting food when busy!

Fantasy Island has some rides indoor they are mostly kids rides like the balloon ride and Toucan Tours, I thought that it was a great idea to have rides particularly with the English rain undercover. I’m surprised more attractions in Skegness and other resorts aren’t inside, rather supporting outdoor attractions and having to hope for good weather, so Fantasy Island gets a big thumbs up for their indoor rides. I’m sure the teenagers and the thrill seekers wont agree with me since there nothing in there for them other than arcades, but still a forward thinking approach from Fantasy Islands to a common English problem the weather, which can ruin many a happy day.

Indoor rides you will find at Fantasy Island

The rides in the indoor plaza not having rides for everyone is the only fault I can think of at Fantasy Island there are arcades, stall games, restaurants and a shop or two inside the plaza, but older kids could feel cheated if it buckets it down with rain and they are not going to be happy if they have bought a wrist band, so check the local weather report before you go. 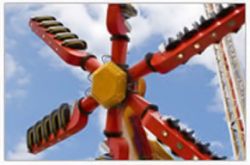 We didn’t get to go on the Dragon Mountain Decent ride which we were looking forward to when we went to Fantasy Island. I heard a rumour that it’s been closed for some time and Fantasy Island are letting it rot, but I don’t know for sure, like I said it’s a rumour, so don’t assume it’s true. I would recommend that before going to Fantasy Island you call in advance to find out what attractions are on since some rides close for maintenance and if the weather is bad for safety reasons.

Fantasy Island is a great day out in Skegness, good for kids of all ages there is something for everyone at Fantasy Island. You’ll get a full day of fun at this popular Skegness Attraction and in an evening a drink in a family pub and a show, or if your young and free a rave in a night club. Fantasy Island is a good reason to visit Skeggy.

Definitely visit Fantasy Islands website: http://www.fantasyisland.co.uk/ and check out what they have on offer.