The word ballet in the Big Ballet is a little misleading there isn’t that much ballet in The Big Ballet show, only about 30 minutes of the two hour show is ballet. There was many dance forms in the show from disco to belly dancing. 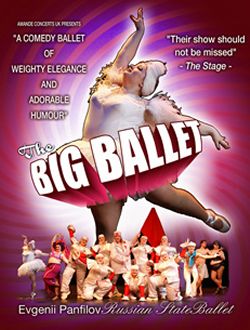 I like my theater to be a little different and the Big Ballet sparked my interest, it sounded fun so since it said it was a family show I took my youngest son (11 years old). I thought The Big Ballet was going to be a comedy ballet.

The very short first half was ballet and we didn’t think much to the 1st half, if the entire show had been ballet it would have been boring, thankfully the 1st half only lasted 30ish minutes then there’s an interval before the much better second half.

The second half is a lively show with disco music and various dance routines mostly English songs are performed, but a few I think where Russian. The comedy translated well that was featured in The Big Ballet, for instance the male dancers in the troupe were all thin and toned and instead of the men picking up the large ladies the women picked up the men. The dancing ability of the large ladies was rather good, The fact that they are all 17+ stone didn’t seem to make a difference in there Ballet skills they could stand on their toes as well as any traditional skinny ballet dancer. I found the ladies of The Big Ballet to be inspirational, they are the embodiment that you don’t have to be skin thin to be fit and sexy.

The Big Ballet Show is for Adults 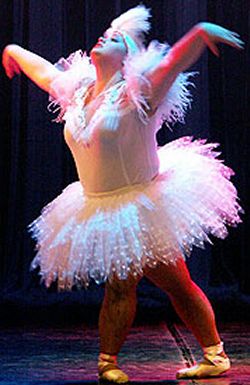 The show was going well for us we were having a good time clapping along to a Russian favorite (you’d know it if you heard it) and watching a colour full show fit for family viewing, it was a good night out of whimsical entertainment. Then The Big Ballet took a wrong turn and became raunchy!!!

I found myself twitch in my seat. My youngest son and I was on the front row as the men on stage started to do the equivalent dance routine that you would expect from the Chippendales! Cat calls started to be thrown from the women in the crowd as the men revealed more of themselves while dancing erotically. The men of The Big Ballet don’t do the full Monty so it’s not that bad, but as a mum with a young boy I wasn’t happy.

My son was only eleven at the time and although innocent he’s not stupid and I could see he was slightly distressed and I wasn’t enjoying this part of the show either, I don’t find this type of adult entertainment fun. Men in the audience was also feeling what my son was I happened to look over my shoulder to see a woman who was a few rows back whooping and calling out while her husband sat uncomfortably next to her.

I would strongly advise you not to take young children with you or your husbands, because of the presence of these dance routines, I would say taking your teenage daughters 13+ with you to see The Big Ballet would be OK if your a mum who’s not phased by this sort of entertainment.

It wasn’t to bad, luckily this was a small part of the Big Ballet and the rest of the show was light hearted and fun and my son and I had a good time, but it did leave me with a uneasy feeling that kept plaguing me during the rest of the show. I was fearful that it was going to keep occurring, I couldn’t relax at all during The Big Ballet and it made me uncomfortable and when you’ve spent £30 on a family night out you don’t want to squirm through any of the show your watching.

I think we should have been warned about the raunchy nature of some of the performance, If I had of known I wouldn’t have gone and definitely not with my 11 year old son! The Big Ballet is a girls night out it would make a brilliant evening out for women to let there hair down for a couple of hours, maybe part of a hens night. I can strongly recommend The Big Ballet for women, you’ll love it with your girlfriends :-)

Would We Go Again : No
Would We Recommend To Others: Maybe to women friends, if they like this sort of thing
Was It Value For Money: No
Recommended For: Women The Big Ballet is definitely Not for the family.