In 2008 Beauty and The Beast Ice Show was performed at the Embassy Theater in Skegness, as is always the case the Wild Rose Skate troupe produced a wonderful show filled with amazing skating talent from the Russian Skate Stars.

The skating was top notch, Andrey Chuvilyaev who played the Beast was amazing, his height really added to the persona of The Beast, when he appears for the first time through the fog it was a wonderful performance, but for me Beauty and The Beast wasn’t as good as the Wild Rose production of Peter Pan On Ice which we had seen the year before. It had nothing to do with the skating it was still breathtaking, I think it was the story line.

Beauty and The Beast Ice Show follows the traditional fairy tail story and it was a little boring, there was very little WOW factor unlike in the Peter Pan production which was action packed with lots of aerial acrobatics and surprises amongst the story that added to the original telling of Peter Pan.

There was some interesting pieces of choreography and my eyes opened wide when two of the skate troupe came out onto the ice in bouncy stilts and started jumping around, but when Beauty kept going back to her father in the village I found myself silently yawning during these scenes. As I said the skating was excellent it’s just the original Beauty and The Beast fairy tail is a proper girly fairy tale, it’s all about the romance with no adventure or excitement. I forgot how dull the original story of Beauty and The Beast is, I’d been spoilt by the exciting Disney version with dancing candelabras and the fight between Gustave and The Beast for Bell’s heart, I’d forgot that these aren’t in the original version of the story :-(

I think the Wild Rose production team should have played around with the story to make it a little more exciting, saying this I took my elderly next door neighbors to see Beauty and The Beast and they loved it so much they had the same reaction as we did when we saw Peter Pan on ice, they wanted to see it again, they found it to be tremendous. 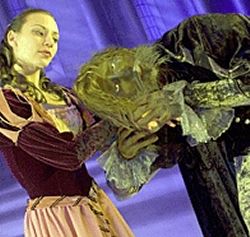 I did find the skating to be tremendous and I would recommend going to see Beauty and The Beast on Ice it’s a lovely night out with the family just try to remember it’s the traditional story telling of Beauty and The Beast and not the one I was brought up with by Disney :-)

Beauty And The Beast Rating