Update: The Plans for the Skegness SkyPier have been approved pretty much as described below. February 2010.

Plans can be found online at

Planning Permission – Erection of a 4 storey building which includes a basement level which provides 2 dance bars, DJ. Podium and toilet facilities, a bar with a dancefloor and a food hall/court to be used within Use Classes A3 and A5 of the Town and Country Planning (Use Classes) Order 1987 (as amended) on the upper ground floor, a club and 2 no. bars on the first floor with the provision of a balcony, and leisure facilities consisting of ice skating rink, roller disco area, internet cafe and cafe all on the 2nd floor with balcony on the site of a former hotel which has been burnt down in accordance with amended plans received by the Local Planning Authority from the applicant’s agent on 26th October 2009. 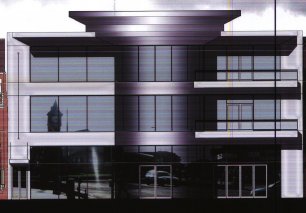 I had a look at the new Sky Pier plans and think the building fits in well with the surrounding area. Now we have the Lucky Strike Arcade which is a modern building, the look of the proposed Sky Pier makes sense (also matches the Skegness Embassy Theater design).

Upon first reading of the plans I thought brilliant, something for families and young people, I can see myself happily breaking a bone or two trying to learn to ice skate! Even posted a congratulatory post on the forum about the plans before realising what a gentleman’s club is.

Call me naive but my mind jumped to World War II veterans when I think gentleman’s club, old men smoking pipes and drinking bitter :) I don’t think half naked women. It took three pages of forum discussions (mostly positive) before someone pointed out the gentleman’s club is adult entertainment (so I’m apparently not the only naive person in Skeg :)).

I hope ELDC planners are aware of the “gentleman’s club” (lap dancing/pole dancing) planned on the Grand Parade Complex site as there’s no mention of that type of establishment on the submitted plans for the Sky Pier?

The only mention is of “a club” which I assume is referencing where the pole dancing and lap dancing club will be.

On the forum Taj Bola also went on to say after being questioned about the Gentleman’s Club:

Q) A Gentlemans Club in the same building as the ice rink.
A) The club is located on a completely separate floor and discretely to the rear of the building. Also, I envisage the leisure facilities will operate from say 10am to 10pm. The Gentlemans club will operate in the evenings after 10pm, so when one looks at the hours of operation, its clear to see that there is no overlap and it thus becomes a non issue.

ELDC would be supporting the operation of the Ice Rink and not the construction of the building.

Q) Why another Gentlemans Club, there is one already
A) This is no criticism of the owners of the current one, however, it is not the type of venue that tourists that visit these places would actually go back and tell their friends about, Given my long term strategy of increasing tourism in a balanced way, we need a venue that again stands out from anything else in Lincolnshire. Be it a Gentlemans Club, Bar, Ice Rink etc.

For too long, operators have failed to invest on the basis that, why reinvest?, the customers have nowhere else to go when they get here. This is a short sighted approach that would ultimately lead to the demise of any resort.

Skegness has to have the image that we are moving forward and that it has the best of everything. Once the new Gentleman’s Club is open I envisage a consolidation of these clubs.

Q) Why Not put it at LA?
A) Hopefully I have something more interesting planned for LA in the future once the Skypier is up and running. Can’t say much at the moment, but again, something to increase tourism.

I don’t have a issue with adult entertainment per se, I used to run a successful online adult business selling adult sex toys and sexy lingerie, but I do have a big problem with mixing adult entertainment (lap dancing and pole dancing) with family entertainment (ice and roller skating), it should never be in the same building. It would have been like selling children’s toys along with adult toys on my online stores!

I assume there will be no legal requirement on the opening hours (please someone correct me if I’m wrong) of the various areas of the Sky Pier not to clash in a way resulting in an ice rink/roller skating area filled with teenage girls while men are in the same building participating (or waiting to participate) in sexual acts.

The proposed opening times for the lap dancing club don’t make business sense, Flirtz Lap Dancing Club is open from 9pm to 3am, by opening later (10pm) the Sky Pier lap dancing club looses valuable business to Flirtz. I can’t see serious business men like the Bola’s sticking to those times for long when they are loosing business.

Even if the 10pm opening/closing times are strictly adhered to, what about those waiting to enter the adult club and those leaving the roller skating/ice skating areas as 10pm approaches, there would need to be a buffer zone to clear the area of young people and families.

There won’t be separate entry points for the four floors of the Sky Pier and as the bars will be open way before 10pm, drunk people will be intermingling with families early in the evening as they both use the facilities at the same times. If I had teenage daughters I wouldn’t want them using a lift with drunk men!

I would like to know what sort of research (if any) was carried out to determine the feasibility of mixing family friendly facilities with adult entertainment? Are there examples of similar buildings with lap dancing clubs and family friendly entertainment where there are no problems?

ELDC would have to be retarded to agree to support an ice rink in the same building as lap and pole dancing no matter what the intentions of the owners are regarding opening hours, especially if they are not legally binding.

You don’t mix family and adult entertainment ever.

As a family who would use a ice rink/roller skating ring we’d never enter a building with a child where nightclubs and adult entertainment is available at the same/similar time because of the risks of dealing with drunks.

If this goes ahead as planned I can see the ice skating and roller skating areas empty after 7pm (especially on a weekend) when serious binge drinking is occurring in the same building.

It’s a damn shame as Skegness could really do with more family friendly facilities like ice skating and roller skating in the early evening, but not this way.