We saw the Baghdaddies at St Mathews Church as part of the SEAS Festival that came to Skegness in 2009 (see our SEAS Festival Review). The Baghdaddies are a group of musicians from Newcastle who play mostly Eastern style music with a Western twist in their choice of musical instruments, I don’t think they have Western drum kits and saxophones in traditional Turkish music :-) 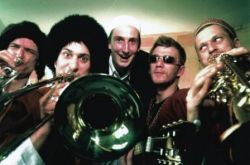 After the interval the musicians told us a little about themselves because a lot of the old people in the audience thought since their band name was the Baghdaddies they where from Baghdad :-) The band members are all Caucasian with Geordie accents which was hard to miss, but some of the old folks just concentrated on the bands name. The Baghdaddies have been around for 15 years and the band name I assume has more to do with the style of music they play than their heritage.

Their music isn’t solely from the East, they play Balkan gypsy with Middle Eastern flavours, shades of klezmer, tango, jazz and reggae plus a touch of ska – all laced with funky dance grooves and blistering eastern brass harmonies (got this information from The Baghdaddies website, no idea what it all means though :-)).

Some of the bands original music made me think of the group Madness, but with an Eastern touch.

The music is very unique and interesting and it made a nice change to the music I normally hear, not something I’d listen to on a regular basis, but at a one off live gig it worked. There was some audience participation, with complicated clapping and despite the church being a relatively small gig they managed to get us doing Mexican waves which was quite funny.

The Baghdaddies music was nice and at times you could move your body to the rhythms, my son and I got up and danced in the isle of the church. We were the only ones who danced, but we didn’t care, music should be enjoyed to it’s fullest in my opinion and I’m not going to let other people stop me from having a good time :-) I have never drank alcohol, so I get my fun from good honest means like dancing. I think if the Baghdaddies played at a dedicated music festival like Glastonbury they’d go down really well.

I would recommend a Baghdaddies gig as a good night out, the music I would say isn’t something you might be used to, but if your an adventurous person and like to try something new then the Baghdaddies won’t disappoint.

Some of the songs were a little long and because of unfamiliarity with the music they could seem to drag on (it was a 2 hour show) and I felt my eyes at times growing heavy during the gig. Although the Baghdaddies don’t play my type of music, I didn’t hate it and some of the music was quirky and fun and I loved the strange stories that the songs were about like a wedding in a petrol station and a man who broke the strings of his lute and wanted to replace them with the golden flowing locks of a girl in the village, very entertaining :)

If you see a Baghdaddies gig advertised near you, buy a ticket and try something new.

Would We Go Again : Maybe
Would We Recommend To Others: Yes, try it once
Was It Value For Money: Yes
Recommended For: Everyone young and old, especially those open to different music styles.

Leave a reply to The Baghdaddies Band Review