This year Skegness is having a Winter Festival for the Christmas period, but the only thing that is different from previous years is on the 11 -12th of December there will be a Beach Motocross Event, don’t know much about it since details are vague, From what I can work out there will be bike racing on the beach and maybe some stunts from the riders.

I’m looking forward to seeing the AMCA Motocross Races on Skegness Beach and it looks like it will be a good reason to visit Skegness for the weekend on the 11th and 12th of December.

Also new for the Skegness Winter Festival there’s to be a firework display at the Skegness Clock Tower on New Years Eve which people have been wanting for years.

There’s more late night Shopping with flashy titles added like Lads Night and festival of food, but I have a feeling it will just be the same shops open longer. 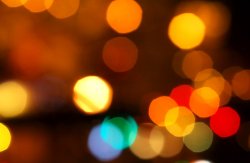 Again because of the lack of information about the Skegness Winter Festival I don’t have any details on the meet the reindeer that is in the Hildreds Center for kids on 2nd December. I don’t know for example whether Peter and Paul are real reindeer, people dressed as reindeer or apart of the Hildred’s Christmas decorations.

I don’t Know if the Winter Festival will be expanded upon in the future, what I can say is I’ve heard on the grape vine is this year it’s been rushed and some thought it might have been better waiting for next year so the Festival could be planned properly.

I have to agree since in the brochure which is mainly waffle and tells you nothing useful, advertised the sky as a reason to come to skeg.

I kid you not! in the Skegness Winter Festival brochure the night sky was advertised “Skegness’ dark nights are famous” (since when).

Now I don’t know about you, but I would have thought every one has a night sky above them :)

Since Skegness has lights ablaze at night just the same as all towns and cities in the UK, it’s not spectacular it’s the same as everywhere else, I know this since I’ve lived in the countryside and can tell you where I used to live you could see the milky way with the naked eye, I’ve never seen the sky in Skegness look anything like it does in the countryside.

Advertising the Sky as a winter spectacle makes the organisers look foolish, talk about dragging the bottom of the barrel.

I will give them some credit for trying the Winter Festival even if it was rushed, Skegness needs something at Christmas time, since moving to Skegness some years ago, Christmas spent in Skegness is rather dull and we have opted over the years to go else where for our Christmas celebrations, taking our money and fun to somewhere that appreciates it. Towns like Brighton that has a good Christmas Vibe with there Burning of the Clocks festival.

I’m optimistic that maybe the Winter Festival can become as Good as the SO Festival and help give Skegness a much needed feel of a real magical Christmas experience.

One thing I have been disappointed in though is that very few people have heard about the Skegness Winter Festival and I don’t think other than the usual people who are in the know and inner circle have had a chance to get involved.

Lets just hope the old folks who run these events learn to look on YouTube to get inspiration for 2011 from other towns across the country, for some fresh and fun ideas, Hint Hint…..

25th Nov 2010
CHRISTMAS LIGHTS SWITCH ON
at the HILDREDS CENTRE

2nd Dec 2010
SANTA COMES TO TOWN and meets the Mascots
Meet, feed and have your photo taken with
SANTA’S REINDEER `PETER AND PAUL` 4pm – 8pm