Skegness Pier can be found on the main Beach area in Skegness.

This review is about Skegness Pier and not the whole complex, you can find further reviews of the pier on this site.

Skegness Pier has some interesting history, but lets face it when your on holiday WHO CARES :-)

The Pier in Skegness is not the best I’ve seen at a seaside resort, but it’s not the worst either.

Skegness Pier is small, quiet and has good views of the beach below, on a good clear day it’s a great advantage point to look across the sea and see the Norfolk coastline in the distance.

The Skegness Pier seems to be looked after relatively well, it’s well painted railings and the boards are firm.

There are a few mobile attractions on Skegness Pier, a hook a duck game and a kiosk selling coffee etc…

The mobile Attractions tends to be trampolines for little kids and a giant inflatable slide for the kids, these two attraction on Skegness pier haven’t change for 6 years, but they can change.

There’s usually at least one new addition every year to spice things up a bit on Skegness Pier like inflatable paint ball shooting gallery, rodeo bull, bungee trampolines or a giant inflatable ball so you can walk on water in a paddling pool, but these change every year and are not a constant feature on the pier year by year.

This part of the Skegness pier is the most interesting and can be accessed via pier arcade or from steps on either of the pier accessed from the beach.

Further up the pier is a little sparse and dis-interesting and this is where Skegness Pier falls short compared to some other seaside Piers around the country like Brighton Pier, which is far better than Skegness Pier, (mainly due to the size). Skegness Pier was damaged by bad weather in the 70’s (I think) and hasn’t been repaired to it’s former glory, instead it has been left as a small pier.

At least in Skegness slimy creeps really can take a long walk off a short pier :)

The Pier has plenty of benches to sit on and watch the world go by, there’s a couple of telescopes you put money into too look out to sea, but that’s it, pretty boring at the end of the pier, most people walk to the end take a look over the edge then walk back again once they realise there’s nothing up there.

The far end of Skegness Pier is more suited to the elderly who like to sit and take in the views.

We’ve lived in Skegness for about 6 years and we’ve only been on the pier half a dozen times, usually only go up onto Skegness Pier when there’s something to look at the art work during the SEAS Festival or to get a better look at the AMCA Beach Races we have in Skegness in November/December time.

Skegness Pier is to small for a traditional ball room/concert hall where entertainment could play, but if the pier could incorporate some thing along the lines of the FANTOMAT which was a part of the SEAS Festival it would add some much needed interest and foot traffic maybe some buskers to entertain people could also be an option.

The FANTOMAT was placed on Skegness Pier it got a lot of interest during the SEA Festival from the public, I can’t help thinking art on the Skegness Pier could be what it needs to give it that X-Factor that it’s missing.

(The below Picture is of the Fantomat that is no longer on Skegness Pier, it was a part of the SEAS Festival 2009) 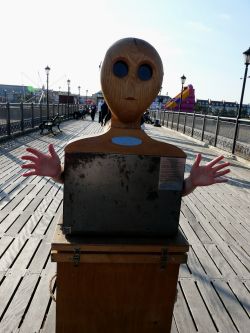 While still keeping the calm aspect to the end of the pier where I’m sure people would like to keep it a tranquile space.

It doesn’t need to be flashy maybe if they had some painted boards that holiday makers could stick there heads in and take themselves some funny pictures it would create the same amount of intrest to the Pier as the Fantomat did, at the moment I think the pier only has one of the funny cut outs to take photos of at the end where the mobile attractions are, IMO ones not enough.

If you’ve got any suggestions feel free to drop a comment below, I’m sure a lot of you have been to other piers and seen some interesting stuff that Skegness could incorporate onto the Skegness their Pier.

They really should think about bring events on a regular basis to the pier particularly in the 6 weeks holidays this would mean for the Skegness pier more foot traffic that would stay on their premises and not go to other attraction in Skegness.

Skegness pier is in a unique position to bring daily entertainment to Skegness holiday makers, they have the space they need compared to say other arcades that have no land. Some ideas could be a family puppet show or street entertainment during the day or night.

When Holiday makers are happy they stay put.