One of Skegness oldest attractions, the Skegness Model Village can be found on South Parade near Skegness Clock Tower.

Skegness Model Village is good for a slow walk around and it’s pretty.

It’s a quaint Model Village with comical shop signs on the tiny buildings and a model train set interwoven through the small houses, although this attraction is called The Skegness Model Village, it’s not actually a model of Skegness as you might assume. It’s a model village of a countryside scene, a small village or town. So don’t be disappointed not to find Skegness buildings in miniature within the Model Village. 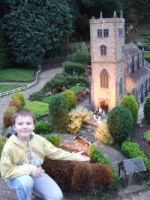 Skegness Model Villages does seem to hold a magical quality particularly for small children, it’s nice to go and see once. I will say without hesitation this is a great Skegness attraction for little kids, so definitely take the little ones to see the model museum. Grandad and grandma will enjoy it’s slow pace, so the Skegness Model Village is good for older people, but for me this Model Village has lost it’s charm :-(

Don’t get me wrong it’s nice and it was sweet to rediscover the ghost hiding in the tower from my childhood, it was just that I couldn’t enjoy it alongside my son finding something new together, I’d seen it all before so it was disappointing in that respect. I found my self waning the second time round the Model Village as my son dragged me eagerly to see it all again.

I remember going when I was a small child in the 80’s. I have to say it has seen better days and the cost to get in is quite expensive for a family considering what you get, at a whopping £2.95 adults and £1.95 children :-(

After going £1 for adults and 50p for children would be more like it for the Skegness Model Village.

It’s a very small Skegness Attraction that has not improved or moved on in any way, it is exactly the same as it was when I saw it as a child which to some degree may be it’s charm for some. I would say this Skegness Attraction is best suited for old people who would like going for nostalgic reasons and small children (under 10 years) who can feel like giants walking around the tiny buildings, for once they are not the smallest thing around at this Skegness Attraction :-), but it lost my interest quite quickly.

Skegness Model Village is a nice museum for people who have never been, but for people who have been before there was nothing new to see and so the novelty wore of fast for me because I'd seen it all before meaning this Skegness Attraction has no revisit power :-(

I thought it was a real shame that it didn't have anything new, and I sense that in this day and age the Skegness Model Village is finding it hard to compete with the bigger Skegness attractions, it's like the Skegness Attraction time forgot which is very sad since it is nice to see this sort of attraction.

It’s just the way of the world now, people and especially the kids of this generation want something a bit more interactive, and the price of the Model Village is no joke for an attraction that has little to offer. The Model Village is a bit like a museum, you can look, but you can’t touch. You wander around for half an hour pointing at a few things then leave.

Before writing this review I did some research and looked up other model villages in the country. I have to say Model Villages seem to be a dieing breed, they all seem to follow the same format in style, but other model villages seemed to offer more than Skegness in that they have expanded to include other activities and facilities so have kept up to date in the type of attraction people want to visit and just as importantly REVISIT.

I am finding it a little difficult to write this review a small part of my heart really likes the Skegness Model Village, I think it holds a special place in the memory of anyone that has been there as a child, but I have to be honest and say it’s a bit disappointing on a revisit.

One of the biggest let downs about the Model Village has to be there’s no where to sit or buy a cup of tea for adults to enjoy while the kids go around the village again, there’s no gift shop to buy trinkets to remember your day, it’s like they’re trying to get you out as quickly as possible?

Maybe this was the case in it’s hay day, but since very few people go there anymore a bench or two wouldn’t hurt, so you can take your time and stay a little longer.

My son who was 9 when we went to Skegness Model Village in 2007 enjoyed it, he didn’t want to leave when we were there, he went around three times. My eldest 14 wasn’t that impressed and was relieved when we left, he said it was nice, but once round was enough. 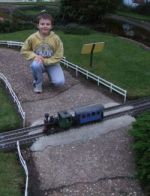 My youngest son has not asked to go back again even though I have offered. I think it’s one of those Skegness attractions that once you’ve seen it you don’t need to go again, one look and your satisfied (which is a real shame).

Skegness Attractions Verdict: Good for little ones and old people especially model enthusiasts. OK for a one off visit if you’ve run out of other things to do in Skegness. Not cheap for what you get so hold your breath when you see the price.

Skegness Attractions Rating 7/10 if it’s your first time. 5/10 if you’ve been before