It was a fun and energetic night of musical entertainment at the Embassy Theatre Skegness when the Gotta Sing Gotta Dance group was on stage.

I’m no expert on musical theatre, never even been to London let alone to the West End, so many of the shows songs were new to me. The musical show captured my interest right from the start and I enjoyed every moment of Gotta Sing Gotta Dance. It was informative and funny with a cast of six performing a compilation of songs and acts from West End Musical’s, “50 songs” in total!

The Gotta Sing Gotta Dance cast was showered with whistles and heavy applause after almost every song from the 200 or so people in the Embassy Theatre audience. It’s rare to hear such enthusiasm from a small Skegness crowd at the Embassy.

The performers are a jolly bunch bringing each song alive with what I have always imagined musical theatre to be, good acting, great voices and fantastic dancing ability. Some songs were slow, others fast paced and some very funny.

My son liked it when the song “Maria” from the Sound of Music was performed and the Mother Superior was a puppet and sang along side two of the female cast who where dressed as nuns :-)

Another fun moment had to be when “You Gotta Get A Gimmick” from Gypsy (a musical I haven’t even heard of) was performed on stage, it was about how to get ahead in a Burlesque and it was very funny :-)

I don’t know if it’s performed like this in Gypsy on the West End of London, but when the lights went off and one of the female performers bra lit up the whole audience laughed :-) The three ladies also acted their parts out really well and you could tell they enjoyed performing the routine :-) 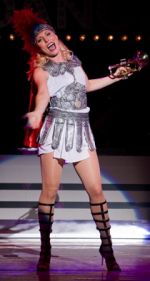 The performers talk to the audience all the way through the 2 hour show telling the audience what musical shows some of the songs came from, which was helpful for people like me who don’t know their musical’s from their elbows :-)

They also gave interesting little tit bits of information like, they added milk to the rain in Singing in the Rain so it could be seen on screen and on the day of the shoot Gene Kelly was ill and had a temperature of a 103 degrees! when he did the famous Dancing in the Rain scene and he completed it in just two takes, WOW!

The three minute medley of West End Classics, (that there wasn’t time for in the show) was genius! Very very funny :-)

Gotta Sing, Gotta Dance Musical is a brilliant show filled with rassel dassel that’s suitable for both those who know their musicals as well as those who don’t. It’s a well produced musical show with tap dancing, quick costume changes, fantastic lighting and to top it all off their very own top class live band. There was some really interesting and imaginative pieces to this show and it all comes together with professionalism.

I’m going again if it comes to the Embassy Theatre Skegness, I’m hooked on songs from the West End, GIVE ME MORE PLEASE :-)

Would We Go Again : Yes
Would We Recommend To Others: Yes
Was It Value For Money: Yes
Recommended For: Everyone Young And Old