Also my husbands going to see Vampires Rock at the Embassy for the 1st time with us in 2009, (his back should be much better by then) so I want to write a detailed review on Vampires Rock 2009 with him. 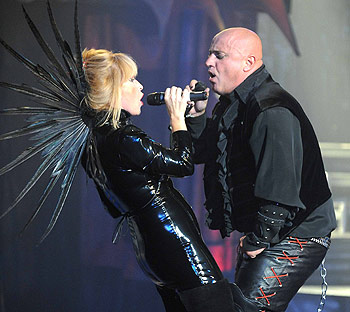 There was a little change to the show in 2008 compared to 2007, Toyah Willcox now stars as the Demon Queen and is touring with Vampires Rock again in 2009, yeah!!! Toyah Willcox makes a wicked (pardon the pun :-)) Demon Queen, her evil laugh was brilliant. The story of Vampires Rock has changed and now follows the lines of Baron Von Rockular still in search for a new vampire bride, but he already has a Demon Queen, Baron Von Rockular 1st and still current wife as you can imagine is not a very happy vampire Mrs :) when she finds out what Steve Steinman’s character is up to. 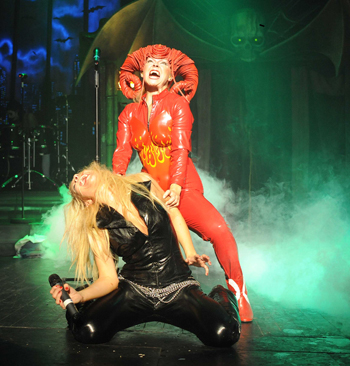 We sat on the front row at the Embassy in 2008, we had tickets for seats on the end of the row for the Vampire Rock show, but swapped seats with a lady in the middle (a family got split up). This seat swapping resulted in me being part of the show! There’s a part of the show when Steve chooses someone on the front row to stare at intently, it was me (eek!!!) he picked and I have to say he looks very frightening! Steve Steinman has the most piercing blue eyes, I don’t know if they are his eyes or if he’s wearing contact lenses, but adding the sparkling pail blue eyes with the fangs was very disconcerting, I didn’t know where to look :-) He chose the right person to stare at that night since I have a problem looking people in the eye when I talk to them, I don’t even look at my hubby’s eyes so having him look at me really did scare the crap out of me. Lots of fun and glad it was me, but I’ll never forget his eyes they haunt me in my sleep and we’ll be sitting at the back next time :-)

If you want a deeper review on the show please see my 2007 Review of Vampires Rock Show.