The stage went dark, lightning struck and the vampire stage was revealed. My youngest son gripped my hand tight when the lighting and thunder echoed around the Embassy theater, but as soon as the music began his face lit up and soon he was jumping around and singing to the rock music.

Vampires Rock is a sensational show! Steve Steinman is a fantastic singer, the band rocks and to top it all off Eddie Ojeda from Twisted Sister was the special guest star in Vampires Rock 2007. 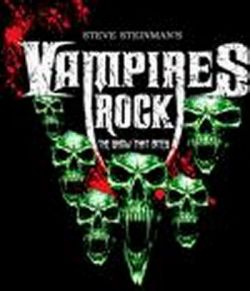 I have to admit I didn’t know who Eddie Ojeda was until I saw Vampires Rock, he’s a great guitarist and it gave that extra humph to the rock show. The best bit with Eddie Ojeda was when he played his guitar solo on top of the gates of hell and when his mouth started to bleed the crowd lost it completely with whoops and calls. The on-chore was devoted to the songs from Twisted Sister and to my amazement I knew them! I don’t know how I knew them, BUT I did and it was fantastic.

We like our theater experience to be a little different and Vampires Rock hit the spot perfectly. 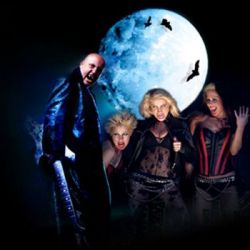 2007 was the 1st time we had been to see Vampires Rock so didn’t know what to expect. I visited there website and it gave me some idea of what the show was about which was great. I’ve lost count of the shows I’ve tried to get info about only to find either no website at all, or totally rubbish content that tells me nothing, So kudos to Vampires Rock for a great website it helped a lot.

After seeing the Vampires Rock website I was a little worried that the show wouldn’t be suitable for my youngest (10 years old) because of the scantily clad women. The clothes are no worse than what Cher might wear, but I thought it might be a bit raunchy, but it’s not, unless you are a complete Mary Whitehouse type :) 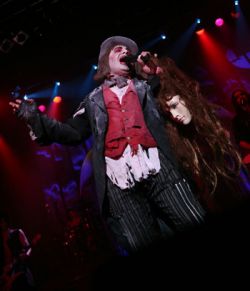 The rock show is all about the music and although it has plenty of fake blood spilling occasionally it’s all done with humor, so it’s not scary for the kids.

Vampires Rock is totally family friendly! The show is for everyone. I was surprised at the age rang of the audience from young kids with there parents to 60+ year olds all having a great time.

Vampires Rock is the ultimate rock concert featuring classics from Bon Jovi, Meatloaf, Queen and Bonny Tyler as well as rock music from today’s charts. This is probably why it’s so popular and has such a wide appeal to all age group.

We were whooping and singing all night, day after my arms ached from waving them, my legs were sour from dancing and my voice hoarse from singing and shouting through out the show. 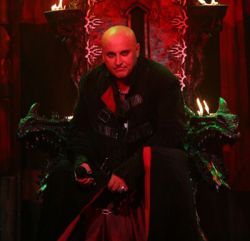 Our favorite part was at there end, every one gets up on there feet and joins in with the show. I haven’t danced like that in years, I got to let my hair down good and proper and it’s been a while believe you me. I had my children young so never got to go to concerts Vampires Rock is the closest I’ve come and I love it! it’s safe to say I’m now a die hard fan of vampires Rock.

The show is more than just a rock concert the performance revolves around a Vampire called Baron Von Rockular who’s played by Steve Steinman and he’s looking for a bride. Steve and his leading lady sing love and hate songs at one another throughout the show. 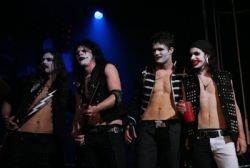 The music is excellent and is performed by Vampires Rocks very own rock band the Lost Boys who it has to be said are brilliant.

The comedy comes in the quirky form of Baron Von Rockular ghoul (servant) called Stringfellow, the banter between the Baron and Stringfellow is hilarious and when they come on it gives you a well earned break for a moment or two, not to mention the Lost Boys poor fingers :-) .

It’s so good with loads happening! I’ve really found it hard to write this review, I feel I’ve not given it enough justice, I want to tell you everything, but I just can’t find the word, so I’ll finish with

Check out Vampires Rock website for more background info on the Baron as well as sample performances.

Would We Go Again : Yes
Would We Recommend To Others: Yes
Was It Value For Money: Yes
Recommended For: Anyone who’s a rock chick or dude at heart (you’ll have a blast) :-)