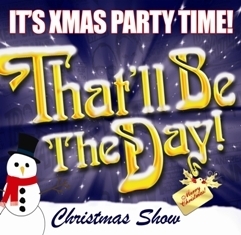 That’ll Be The Day Christmas Special has been difficult for me to review. Some bits I liked, but the structure of the show was disappointing.

That’ll Be The Day is basically an older persons show, although I was born in 1975 a lot of the music I didn’t even know. I thought the songs would have mainly been all time favorites, that everyone knows no matter when you were born. Especially on this occasion, since it was the Christmas special and a lot of young children were there.

The old folks in the audience got to have a good singalong to tune’s we didn’t know, from the 50’s, 60’s and 70’s. I found it frustrating that when they did sing a song from a band we all know and are proud to love like the Beatles or Elvis they sang songs I hadn’t even heard of.

I remember the popular rock and roll tune’s from my mums collection with fondness, but bizarrely they where missing from That’ll Be The Day Christmas Special.

My thoughts are That’ll Be The Day’s target audience is the over 60’s. Me and my kids felt like a third wheel, we just kept looking at each other for reassurance when songs where performed we didn’t know wondering exactly what a song about summer had to do with Christmas.

If it hadn’t have been the Christmas special that we went to see, then That’ll Be The Day would have got a lot less than the 5/10 Star Rating our family awarded the show, for us the rest of the show got a meager 3/10. Which is a shame, I couldn’t help thinking how much better the show could have been if someone had put some thought into the structure of the Christmas show.

A Christmas special should be just that, special and Christmassy

Now for the parts I did like. That’ll Be The Day does an adult panto in their Christmas show ours was Cinderella and Rod Stewart (not the actual Rod Stewart) was Prince Charming, We thought this was very funny- but be warned it’s a little rude, young children’s ears should be covered at times :-) , it made us chuckle.

I also loved the Christmas songs, which is why I went in the 1st place, they were the chart topping Christmas hits we all love and enjoy at Christmas time. I liked this part of the show immensely and to make it even better, at the end of the evening the audience got to their feet and we all had a good old sing-a-long to the Christmas hits, which made us feel good and was a lot of fun .

Also liked the funny Christmas TV adverts that was put in the show, I thought that was unique. It was just a shame there wasn’t more to watch, I mean everyone loves funny TV ads.

The skits they did between songs where funny and a must see.

My youngest sons favourite bit was the snow which was shot into the crowd.

All the things above, the singing, comedy, panto and snow are what makes Christmas special, I would have preferred to have seen a show devoted to Christmas. About 50% of the show was to do with Christmas.

It’s a shame that the bits that we liked where such a small part of the show in comparison to the rest, which we found boring and confusing, since we didn’t know any of the songs.

If on the other hand you don’t know songs from the 50’s, 60’s and 70’s most of the show could be disappointing, even if like me you grew up listening to your mum’s records from those eras and enjoyed them.

It wasn’t a bad evening out, but it wasn’t a great evening either.

Would We Go Again : No
Would We Recommend To Others: No
Was It Value For Money: No, The Christmas Part Was
Recommended For: Over 50’S