Spirit Of The Dance is an Irish dance show, before we went we had never been to see Irish dancing, in fact the only Irish dance production I had ever heard of was River Dance with Michael Flatley. 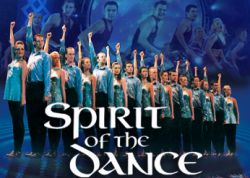 I had no feelings towards Irish dancing either way, but I have caught the theater bug big time and was feeling withdrawal symptoms, I hadn’t had my show fix for a few months :-) So this was an interesting experiment for me and my 12 year old son to go see a show at the Skegness Embassy Theater we wouldn’t normally go to see.

Spirit Of The Dance isn’t a theater production just about Irish dancing it also has other dance forms like flamenco dancing, tap dancing and waltz, the show is choreographed very well and there’s some great dance sequences.

Spirit Of The Dance Video

One of the dance sequences in Spirit Of The Dance was at the very end, the performers sat on the edge of the Embassy Theater stage and did a routine with claps, it reminded me of when I was at school in the playground passing on claps in a circle with my friends. The performers tried to get the audience to join in, but it was too complicated a routine for me and my son to try, besides I didn’t fancy slapping the hands and lap/leg of the stranger sat next to me! I don’t mind talking to or sitting next to people I don’t know, but I draw the line at slapping there thighs :-) It was a lot of fun to watch and my son enjoyed it immensely.

There’s singing in Spirit Of The Dance one song if I recall, and a fiddler he is brilliant and a lot of fun. He came on several times during the show the audience was encouraged to clap along to the music he was playing, the faster he played the faster we got to clap along. We had so much fun, the speed he could play a violin was WOW!, amazing. 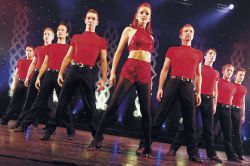 The only criticism I have was some times you didn’t know when to clap the performers didn’t give very clear instruction on if and when to join in, so sometimes you would be clapping during a piece of music when it would stop suddenly and change direction and then other times no one would be clapping when the performers wanted us to. I feel that if a couple of the dancers could have had a microphone and talked to the audience, it would have made it so the audience was a little more relaxed and would improve Spirit Of The Dance. The lack of communication with the audience is the only criticism I have, every thing else, the lighting, music, dancing was spot on.

Over 30 million people world wide have seen Spirit Of The Dance it has raving reviews from both media and fans, me and my son totally agree. Spirit Of The Dance is a show not to be missed, I can always tell how well a show is by how many kisses I get during the production, and I got a lot of kisses from my son that night, so it’s official, Spirit of the Dance is a must see as certified by my 12 year old son :-) he smiled all the way through the show and we clapped to the music so much our hands hurt and arms ached, we went home happy and my son raved about the show to his Dad for a couple of days.

Spirit Of The Dance Rating

Leave a reply to Skegness Embassy Theater : Spirit Of The Dance Review