The 1st thing I have to tell you about Songs Of Sister Act is it’s not the official Sister Act The Musical that is in the west end of London. This is a independent production, it doesn’t have any acting in the show it doesn’t follow the story of the Sister Act film it is purely the music and songs that was in the film nothing else. 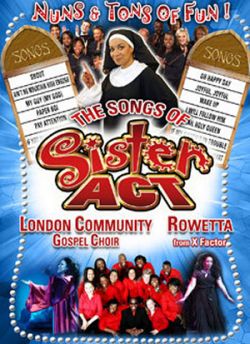 I tell you this because in the crowd at the Embassy Theater a lot of people including a lady I was sat next to and he coach group thought Songs Of Sister Act was a show like the movies, and although she was enjoying herself she was a little disappointed.

Songs Of Sister Act stars Rowetta, someone from the British x-factor show. I’ve never heard of her since I don’t watch X-Factor, I found her voice to be a bit to low it wasn’t bad just her singing talent didn’t suit the Songs Of Sister Act her range was a little to low and deep.

The London Community Gospel Choir who accompanied Rowetta these guys and gals are absolutely brilliant, wonderful singers. I’m not a religious person in the slightest, but I’ve always loved gospel music. I think if the Songs that’s featured in The Songs Of Sister Act where sang in a Skegness church and I could join in and be in a Gospel Choir I’d go every week.

Songs Of Sister Act had a performer he played the character of an Evangelist, he was the comedy element to the show he ran around the crowd getting people out of there seats and getting them to clap along to the music, the audience was encouraged to stay out of there seats all the way though but most people in the audience at Skegness remained reserved and stayed in there seat, only a brave few of us where up most of the night. I must say if it wasn’t for Evangelist character Songs Of Sister Act would have been a little dry.

During the show three members of the audience are chosen randomly to go up on stage and they get to join in with a song with Rowetta, so keep your heads low if you don’t want to get chosen when the lights go up :-) . 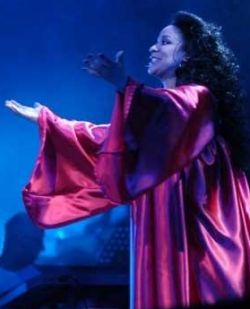 My youngest son and I went to see Songs Of Sister Act dressed up, me as a nun my son as a priest, he even went to the trouble of making his own Bible out of a card board box. We went wearing the whole ensemble.

It said on the advertisement for Songs Of Sister Act dressing up from the audience was encouraged, but me and my son where the only people in the Embassy Theater who went dressed up :-( ,
But we didn’t care where a very out going and lively family so we didn’t care we where the only ones. We’ve learned from all the shows we go to most people don’t have it in them to be different and stand out from the crowd which is fine by us it means where the ones to shin :-)

There where about 5 women at the back of the theater in Skegness who had just the black head dress on, but every one else was just when in there normal clothes for the show.

The music in the Songs Of Sister Act featured was mainly from the Sister Act movies but also some classic Motown was included in the show. I like the songs from Sister Acts First film more than the second movie personally, the Motown songs where well known songs like James Brown. There’s a live band on stage but other than them the production was sparse on extras, there wasn’t any which is always very disappointing.

Although my son and I had a laugh and a good time there was something missing from the Songs Of Sister Act, I can’t quite put my finger on it. My recommendation to you is go, it’s a good night out and better than what on the TV :-) , but for me I’m content with having been once it wasn’t bad in anyway just it lacked for me returning power and although. If it comes back to the Embassy Theater in Skegness I think I’ll try a new show instead.

Would We Go Again : No
Would We Recommend To Others: Yes
Was It Value For Money: Yes
Recommended For: mainly ladies, a good girls night out, also suitable for kids