The most entertaining show we’ve ever seen :-) Shakespeare Abridged is hilarious. 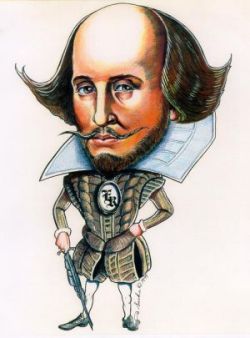 The best thing about Shakespeare Abridged 37 Plays in 97 Minutes is you don’t need to know anything about William Shakespeare plays to enjoy the show which is good because I know absolutely nothing.

We loved this comedy it’s so full of energy and enthusiasm you can’t help but instantaneously fall in the love with the three actors on stage, the show is performed so well, and it’s all done with tongue in cheek humor that any one including a Shakespearean philistine like myself can enjoy and understand. 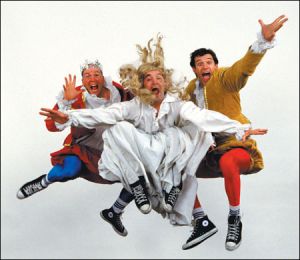 The tonight show in the U.S.A said “If you like Shakespeare, you’ll like this show. If you HATE Shakespeare, you’ll LOVE this show!” I totally agree we had one of the best nights of our lives in the Embassy Theater in Skegness and it is a memory we will share a laugh about for a life time. Who would have thought the reduced Shakespeare company would have performed in my humble little seaside town of Skegness, it’s not every day the Embassy Theater can boast a West End show.

Shakespeare abridged got a unanimous 10/10 from me and my kids, that has never happened before for any previous theater production we’ve seen, there’s always one or two of us who disagree, but definitely not on this occasion we all gave it a big thumbs up, Shakespeare abridged is fast paced and fun. 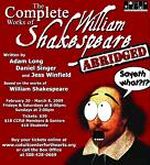 When people hear the name William Shakespeare their eyes roll back in there heads, I have to admit I am also one of these people, I have distant memories of having William Shakespeare’s plays crammed down the throats of pupils at school leaving us all with a bad taste in our mouths and memories of insane boredom.

Rest assured Shakespeare abridged (abridged meaning shortened down) is nothing like school it’s a fantastic comedy that’s refreshing and funny. We positively loved this show, my kids laughed there socks off all the way through.

Shakespeare abridged is lively and boisterous it isn’t a show you watch but a show your a part of, all the way through the Shakespearean actors are talking to and interacting with the audience. I had Cleopatra throw up in my lap after she had been bitten by an asp, my eldest son got to go up on stage and run backwards and forwards while the rest of the audience was joining in wave their arms above their heads and chanting and singing.

I wont go into to much detail about this part of the show, it would ruin the surprise I will tell you it as some thing to do with Hamlet so hold onto your seats or you could be up on stage like my son was. Oh! and one lucky women in the audience will have a big part to play.

The actors run around, jump about, fall down, and do costume changes that are so fast they’d put Superman and his phone booth to shame. It’s a none stop roller coaster of fun, the actions so fast and furious it can make your head spin :-)

The contents of the show is so unique, imagine Othello as a rap song, Titus Andronicus yep I’d never heard of it either as a cooking program (very funny), the kings in Shakespeare’s plays depicted as an American football game with the passing of the crown (this is excellent) and Hamlet performed forwards, backwards and sideways at record speed.

Below are some quotes from professional critics, this is the 1st time I have ever included quotes from critics because quite frankly I think there pompous asses who don’t know what there talking about, but on this unique occasion I agree full heatedly, they’ve hit the nail on the head with there praises…

“A madcap condensation that features non-stop laughs. Done at a whirlwind pace and with great delight, they are sure to win over even the most skeptical. And there is no doubt that William Shakespeare himself… would approve.” Daily Variety

“The funniest show you are likely to see in your entire lifetime.” Montreal Gazette

“Absolutely hilarious. Must be seen to be believed.” Los Angeles Herald Tribune

Would We Go Again : Yes
Would We Recommend To Others: Yes
Was It Value For Money: Yes
Recommended For: Anyone with a good sense of humor who loves a good laugh