My youngest son and I went to see route 66 at the Embassy Theater in Skegness. Route 66 started with the roar of a Harley Davidson which adorned the stage the band exploded into born to be wild and the show began. We had a great time watching an astounding show. 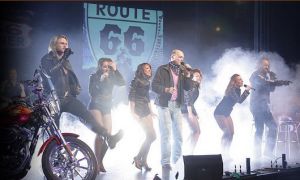 Route 66 I am very, very happy to say didn’t make this mistake, all the older songs where well known popular songs. I don’t think there were any me and my son didn’t know and he’s only 12, I was surprised at how many he knew and could sing the full lyrics to, to all time favorites like: Sweet Home Alabama, Son of a Preacher Man and Great Balls of Fire we knew them,

we loved them and it was great, we were jumping around and singing all night.

Normally my generation is forgotten when shows that have a mixed bag of classics are put together, accommodating the older folks in the audience more than the rest of us, flooding there shows with mainly 60/70’s songs.

Some high light songs where: Sheryl Crows, All I Want to do is Have Some Fun, Elvis Presley medley, Meatloaf medley, Bruce Springsteen’s Knocking on Heavens Door, 60’s medley, Cher Walking in Memphis, Aerosmith medley to name but a few. There was Neil Diamond and Johny cash not a personal favorites, but it gave me and my son a well earned rest for a while when these songs where performed :-)

The lighting was top notch and added a great concert feel to the Route 66 show with strobe lighting and special effects there was a projection screen that accompanied the songs, dance routines and a bit of acting too. 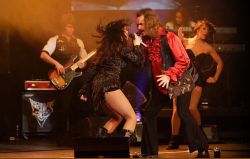 I have to give it to Route 66’s back stage crew for there efforts you know when a show is cheap and nasty when a production is in it for the money there’s no lighting, no sound technicians and the stage is bare. It all comes down to the detail and a dedicated back stage crew which Route 66 had the stage was filled with an American style bar, a Harley Davidson motor bike and a live band, thanks to the efforts of everyone involved Route 66 was a fantastic night out.

The male singers in Route 66 where exceptional especially Nathan James, he had an amazing voice and sang Bon Jovi very well, in fact he hit some notes not even the Jovi could have done.

The reason I went to see Route 66 was because Bon Jovi was on the billing, so as a dedicated Jovi fan it’s a real complement for me to admit that.

Wayne Denton was the other great male voice, he sang the songs the audience got to clap their hands to and was encouraged to sing along with like: Country Road, (Take Me Home) by John Denver. I always love audience participation It means you can get deeper into the atmosphere of the show.

The female singers where OK, but had no where near the singing talent of Wayne Denton and Nathan James. The female vocalists can sing and there good don’t get me wrong it’s just they reminded me of women who can sing good karaoke down the pub or cabaret on a boat or at Butlins. There good just not exceptional, their singing talents where better than Rev Dr Clive Jackson though and if I can forgive him for his singing abilities then the girls have nothing to worry about, they were enjoying themselves so it didn’t take anything away from Route 66, singing isn’t the only thing that makes a good show it’s also heart and hard work and the ladies of Route 66 had arm full’s of showmanship and enthusiasm.

If Route 66 comes back to the little seaside town of Skegness I will be going to see it again it’s lots of fun, professionally performed and a great night out and for me a mum I don’t get too many of those, so I will be cruising down the worlds most famous highway through the best of American country, rock and pop in a spectacular musical extravaganza once again and me and my family will be having a rocking night out getting our kicks on Route 66!