We went to see The Cirque De Glace Ice show at the Embassy Theater, Skegness in June 2009.

Wild Roses are a spectacular ice skating troupe from Russia, we have been to see several of their ice shows at the Embassy Theater, Skegness each one has been a spectacle to watch full of amazing skill and exceptional skating talent, but Cirque De Glace went one step further including some jaw dropping circus skills all portrayed on thin ice.

It is an astonishing show with plenty of action I only wish I had an extra pair off eyes so I could watch all the choreography at the same time and not miss a single spin. Cirque De Glace is one of those shows if you blink you could miss a great trick or maybe two, so invest in some extra strong sellotape or some triple strength matchsticks to keep your eyes wide open, so you don’t miss anything :-) 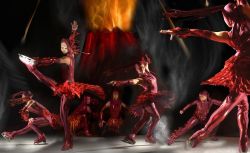 I have to admit that at the beginning of the performance I was a little apprehensive due to the fact I had high hopes for the Cirque De Glace Ice Show since like I said we’ve seen other Wild Roses productions and they have been truly amazing, but Cirque De Glace started a little shaky. The beginning introduction went on a little longer than was comfortable with just a voice over telling us the beginnings of our planet and a light flickering on stage. Then the opening scenes of the world on fire choreography was a bit unexceptional with very little skating going on. The skaters ability to just dance was lacking. There movements and enthusiasm was lethargic it was like watching a school recital being performed by unenthusiastic teenagers. My heart almost stopped in my chest at this point since the story of the show was an unknown quantity Cirque De Glace is a story about the birth of Earth up until humans destroy themselves (almost).

Also my husband had managed to come and see the show if you have read my introduction then you will know my hubby has just recently had his back fused and hasn’t been able to sit in a chair for 10 plus years, this was his first show after the operation on his back, so I was also worrying if he was in any pain while watching a possible expensive dud! 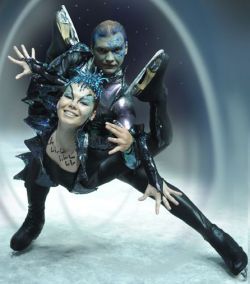 It soon picked up, I needn’t of worried and should have trusted my original instincts that this was going to be a show only a fool would miss. It was astronomical in artistic prowess, the story although scientifically inaccurate (hubby who studied science at University was happy to point out the scientific errors to us after the ice show :)) was well done and as usual the skating from the ever professional Russian skate stars was second to none. Every time I see the Wild Roses perform it always takes my breath away with there expertise and graceful performance. Cirque De Glace was a real eye opener, we were flabbergasted by their mind blowing skills, I actually think at one point I shouted aloud “bloody hell” when one of the male skaters picked up a female skater then she balanced on one foot, in her skates on his shoulder-OUCH!. 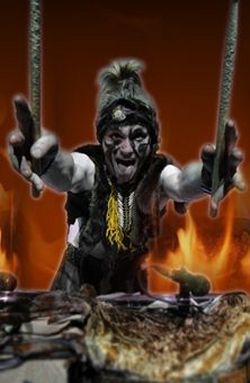 I clapped, cheered, whooped and whistled I didn’t care who heard me, they deserved to know just how wonderful they are and how much I appreciated such an amazing experience. I’m astonished that not only are the Russian ice skating stars are so adept on ice, but also have great skills as circus performers.

The music was brilliant our youngest son particularly enjoyed the drummer who was banging on oil drums at one point. The drummer added an extra dimension to Cirque De Glace and made the show feel raw and animalistic, set our hearts banging in our chests. I have to say having a live drummer was an excellent touch, it worked a treat well done Wild Roses.

The only down-ish side to the show (other than the slow start) was the gymnast on the ball/Earth which got a little bit tedious since she came out several times during the ice show. Her performance was good and none of her routines were the same, so when she came on stage it was slightly different each time and her agility and strength is something to be admired. We just thought it was a bit too much of the same thing.

Our suspicion is the gymnast was wheeled out on the Earth ball so the other performers could have a breather and to allow the stage crew to get ready for the next set of mind blowing tricks. 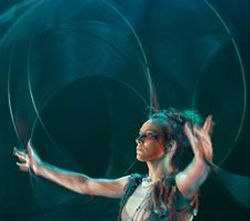 The Cirque De Glace Ice show is such a fast passed energy driven show with so much going on. It’s awe inspiring with women swinging in the air via ropes so high they was in amongst the theater lights, where they commanded death defying feats.

My personal favorite was the trees scene where two guys bounce on slither thin poles somersault in mid air and land with startling accuracy. Very impressive. There was also a very funny scene added at this point that the entire Embassy Theater audience laughed at, adding a little comedy pure genius.

Cirque De Glace is stupendous, there’s Dazzling costumes, fantastic lighting, a giant wheel, there’s spinning, twirling, fire and mayhem and to top it all off fireworks.

Sorry for being so vague, but if I tell you all the marvelous skills that are portrayed in the ice show it will ruin the surprise and take away the magic that is Cirque De Glace.