We went to see the Chinese State Circus perform at the Embassy Theater in Skegness in January 2007.

We had the privilege to see a spectacular show full of colour, energy and amazing acrobatic feats. 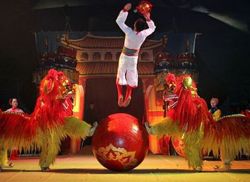 The show began with an audio presentation with the Monkey King acting along side on stage. I have to say at this point I was a little dubious and inner panic set in as I thought about the disappointment of my kids, the pain my husband was enduring sitting in a chair (he suffers from very bad back pain) and the money we had just spent on the tickets, which was a lot for our family at the time (recently bought a house in Skegness). All this adding to the fact it was the 1st time we had ever gone to the theater, I started to fear the worst.

I had nothing to fear. The Chinese State Circus show erupted into a superb experience that just got better and better as the evening went on, exploding into a grand finale. Thanks to the Chinese State Circus performers we now have a love for the theater, and we go several times a year to see shows at the Skegness Embassy Theater.

The Monkey King was the comedy equivalent to our clowns, he would come on throughout the show and annoy the other acts as they tried to perform. His finale at the end of the show was great my kids loved him.

The shaolin warriors had top billing, there sword skill and choreography was very good, unfortunately there swords aren’t real, they had flimsy metal replicas which sounded like a bad Rolf Harris CD :-), but since we were in the front row I was happy they had the replicas or I might have been going home with an eye missing. 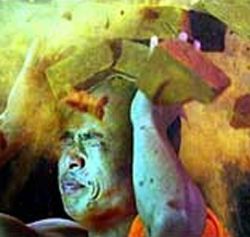 I felt like I’d seen it all before and found this part of the show quite tedious at times, just not my sort of thing.

For me the rest of the show was the spectacle like the woman with a 100 faces, the speed in which she could change the masks was very impressive, with just a swish of her cape another face would appear. 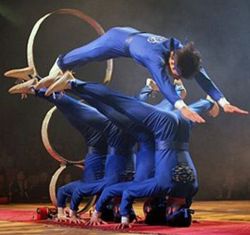 The tight rope walker was a real crowd pleaser, he got out a small unicycle which he pedaled with his hands across a slack rope, which is much harder than a tight rope as I understand it.

The pot jugglers where amazing catching huge pots on there heads, passing them to each other with out using there hands. 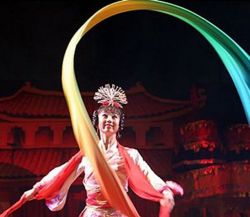 The geisha with her concealed throwing knives was a thrill. She wore a beautiful kimono with really long sleeves, which she swirled around in a gentle dance. Then without warning two knives shot out of her sleeves as she threw them at a board and popped balloons with fantastic accuracy.

We got to see the world famous Chinese Dragon. The Dragon was luminous, the theater lights where turned off as the dancing dragon was performed on stage unfortunately you couldn’t see it very well it might have helped to have had a black light shinning on the stage instead of relying on the luminous fabric.

Our kids particularly liked the funny chefs with there crazy cooking show made us all laugh. 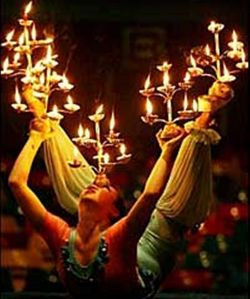 My husbands favorite was the contortionist, even if I was a contortionist, you wouldn’t catch me balancing flaming candles above my head with my feet.

My favorite part was the Chinese lions I would have liked to have seen more of them in the show, I found them to be enchanting, watching them sent a tingle down my spine and made me feel like a child again. In English culture we have nothing as wonderful, colourful and magical as the Chinese lions, I could have watch an entire show devoted just to the Chinese lions. 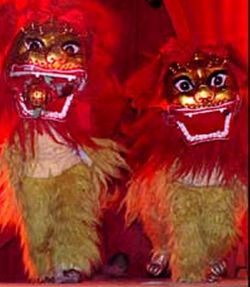 The only quibble I have was the Embassy theater stage seemed a little small, I can only imagine how much more wonderful the show might have been if they where in a big top with plenty of room, saying that the show was still wonderful and it didn’t seem to hinder the performers.

Your Kids Will Think they are Shaolin Warriors

Take my kids for example they have been jumping around for months with foam pipe lagging, emulating the shaolin warriors they have even gone to the extent of actually choreographing there routines and are having so much fun, and entertaining lots of old ladies when they practice outside :-)

My kids Probably won’t become shaolin warriors, but the experience has at least opened there eyes to new possibilities, they now know these things are possible and with hard work they to can do something cool, maybe not as well, but hey.. today’s game of shaolin warriors could become tomorrow’s extreme sports enthusiast, not sure if that’s a good thing!

I don’t want to ruin the surprise for you if you decide to go and see the Chinese State Circus so I’ll say no more. If it comes back to the UK and visits your town don’t hesitate go see the Chinese State Circus, it’s worth every penny, and you only live once so go on spoil yourself. We had the privilege to see a spectacular show full of colour, energy and amazing acrobatic feats that will stay with us for a life time.

A great night out, highly recommended :-)

Would We Go Again : Yes
Would We Recommend To Others: Yes
Was It Value For Money: Yes
Recommended For: All Age Ranges