Chicago Blues Brothers show is fun for the whole family. I loved the fact that some people went to the show with the Blues Brother hats and dark sunglasses. I thought I wasn’t really into Blues and Motown music, it’s a little before my time, but apparently I am, we had a great evening. Both me and the kids knew the music quite well and even the stuff we didn’t recognise still got us moving. 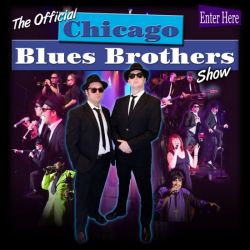 A few of our favourite songs were Minnie the Moocher, Flip Flop Fly, Respect by Aretha Franklin, Every Body Needs Somebody, Raw Hide and Keep on Lifting me Higher and Higher. A few of these songs had audience participation which was fun.

I just about remember the Blues Brother movies from when I was a child and I remember the films made me feel good and the music was great, so I went along to the Skegness Embassy Theater and bought our tickets. We chose seats at the very back of the theater so we could get up and dance without disturbing anyone, and dance we did all for two solid hours of fantastic music :-)

I was a little disappointed at the turn out for the Chicago Blue Brothers, all you Skegness people who decided to go to the pub the night Chicago Blues Brothers was on at the Embassy getting in baby sitters and sitting around a pint all evening missed a treat. You could have been having a great night out with the family for less money than it costs for a night out in your local, shame on you :)

If you are people like us who enjoy a good show and you don’t mind letting your hair down and you don’t care who sees you then the Chicago Blues Brother show is for you. In fact we spent so much time out of our seats dancing that an elderly gentleman asked me “how come I have so much energy” my reply was “I’m young at heart and full of fun” :-) , he said “he wished he could still dance” my reply was “if your legs tapping, your hands a clapping and your hearts pounding to the music you don’t need to get up and shake your thing”.

Most people in the Embassy Theater didn’t get up to dance until the very end. We were the only ones that night on our feet all the way though, which was surprising since the people who had turned up in the Blues Brother costumes you would have thought would have more life in them.

Trust me when you watch the Chicago Blues Brother let yourselves go a little you’ll get more out of your theater experience if you do. I can understand elderly people not getting up to dance, but if your able, people raise your arses out of your seat for this is a show you can dance to.

The only problem with sitting at the back of the theater was when the audience was encouraged to join in, one song in particular springs to mind when Aretha Franklin’s song Respect was performed very few people in the audience shouted back. We did, we where yelling our heads off, but I don’t think they could hear us on stage :-(

They are very good at what they do.

The night we went to see the Chicago Blues Brothers the first half was plagued by gremlins in the equipment. The technical difficulties were a little annoying when they popped up and one song just before the interval was ruined, I felt my self becoming tense at this point from annoyance, but I could see the performer where more annoyed than me, it is their show after all. It didn’t devastate the evening, and on the second half of the Chicago Blues Brothers they came back strong with an energy packed and flawless second half.

The stamina of the Blues Brothers have is amazing, the music wonderful the performance is uplifting and a real bum wriggler of a show every one has soul in them somewhere and the Chicago Blues Brothers will help you find it.

This is a show that should be passed on to the next generation so ditch your usual down at your local pub and take the kids and have yourselves a good family night out.

Would We Go Again : Yes
Would We Recommend To Others: Yes
Was It Value For Money: Yes
Recommended For: Everyone Young And Old