I might have found my Achilles heel in theater shows it could be musicals,
Annie just didn’t do that much for me :-(

I remember watching the film Annie when I was a kid in the 80’s and I really liked it, so when I saw that Annie was coming to the Embassy Theater in Skegness I didn’t hesitate to buy the tickets.

It never even crossed my mind that I wasn’t going to like Annie, it was a total surprise to me.

I’ve been known to sit through musical theater and musical films in the cinema. 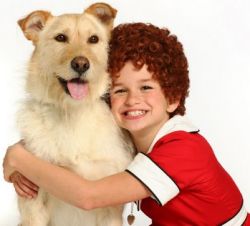 I went to the Embassy in 2007 to watch Little Shop Of Horrors that was produced by a local drama group from Skegness and both me and my kids like this musical production and for musical films. Like I said I liked Annie and I loved Tim Burton’s Sweeney Todd and I absolutely adore Disney cartoons, they always have singing in them, but the theater production of Annie I didn’t enjoy.

There was some good performances in Annie, Ruth Madoc who played Miss Hannigan was very funny at times, I looked forward to when Ruth Madoc was on stage. The guy who played Oliver Warbucks was also rather good at acting. The dance routines the actors did together was enjoyable, I liked the on the street dance routine when Annie gets to go buy her dress with Oliver Warbucks. 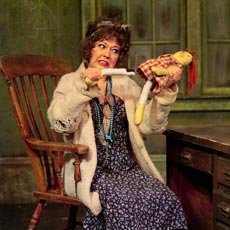 The rest I found to be tedious and a little annoying especially when the little girls sang, I found them to be very squeaky and too theater in their performance, it came across syrupy. I found the little girl who played Annie to be a little full on. I know she’s just a kid! but her performance and the other girls just annoyed me.

My son didn’t enjoy it either he almost fell asleep on my shoulder at one point.

The best parts was when Annie’s dog came on stage it gave some much needed comedy since the dog didn’t do what it was supposed to at one point.

I think you either like musical theater like Annie or you don’t and I think I don’t. If you had a different opinion of Annie don’t hesitate to comment since I feel because musicals are possibly not my thing I might have missed a positive aspect to Annie. Annie is renowned to be a hit family musical, I just didn’t see it.

Skegness Attractions verdict : It was alright, nothing special, and sickly sweet with annoying kids.

Would We Go Again : No
Would We Recommend To Others: No
Was It Value For Money: No
Recommended For: All Ages