Skegness Boating Lake – What’s going on with the Yellow Water

We walk around the boating lake twice a day on our daily walks and the colour of the water has got us concerned, since spring the water has become a bright mustard yellow colour.

It looks like toxic waste, don’t fall in kids you could become a mutant :) 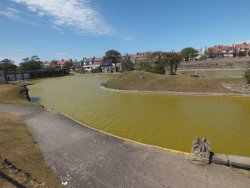 More than likely it’s just algae build up, so nothing to worry about, basically the Skegness Boating Lake isn’t aerated enough with both fountains and natural plant life and due to people feeding the ducks and the wild fowl defecating (pooing) in the water it’s become nutrient rich.

As you can see in the picture I took of Skegness Boating Lake on 4th June 2011 the two small water fountain are not on full.

The fountains in the Skegness Boating Lake are well passed their sell by date with some of the jets not working, these are either two small or too few to circulate the water enough for such a big lake IMO.

I Feel sorry for the fish in the boating lake.

The fish in the Skegness Boating lake died a few years ago in 2008, people woke up one morning to hundreds of dead fish floating on top of the water.

The headline in the news paper was Skegmess this is an extract of what was printed by the local newspaper:

“AS the town moves into its busy summer season you would expect the town to be flourishing.

Instead visitors are greeted with the sight of a boating lake full of dead fish, a vandalised Fairy Dell, sand covering the walkways by the beach and weeds and rubbish taking over.

The Standard was horrified to be called out to the boating lake on Monday morning to reports of hundreds of dead fish.

Coun Brian O’Connor who runs the lake said: “My staff were pulling fish out by the bucket load yesterday.

“There’s duck and goose mess all over. The place just looks toxic. People are complaining.

You would have thought Skegness Councils would have learned at that point that the boating lake has a problem with not enough air flow in the water.

I’ve not been impressed this year, Skegness Boating Lake has got a filthy film on top of the water and the rubbish is building up, it’s not smelling that good either, it was bad in 2008 in 2011 it’s worse.

What should be a flourishing part of Skegness Visitors seem to have picked up on the neglect of the boating lake and tend to stay away, I remember in the 80’s when I was a child the boating lake was humming with activity, now it’s a shell of what it once was.

This isn’t good for Skegness and the tourists have started to notice and voice their concerns, we walked past a group complaining loudly about the boating lake and I have to agree, it’s a disgrace.

My hubby tried explaining to them about the water colour that it could be algae growth, obviously he’s no expert, it’s just an educated guess, but they were having non of it. 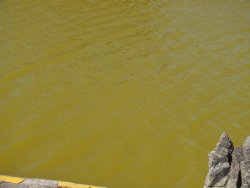 It wasn’t just a case of the water colour and quality of the water, but the rubbish and the atmosphere of the boating lake they were complaining about :(.

They asked “Why doesn’t the boat business working off the Boating Lake tidy up the rubbish”? they have a point if your making money off of the boating lake scooping up rubbish to make your customers happy, instead of having them row through rubbish is a valid point, but one I can’t answer.

We all know when it comes to councils nothing is straight forward.

Skegness should be careful and catch this early, 7 years ago before moving to Skegness we lived in Cleethorpes and their boating lake got blue algae, which is an health risk to humans.

Cleethorpes had to close down their Boating Lake for months with the yellow and black warning tape erected around the perimeter, no one was allowed on or near the lake, it was drained and cleaned with all the fish and plant life having to be replaced.