Bottons Pleasure Beach in Skegness has got a new thrill ride for 2010. 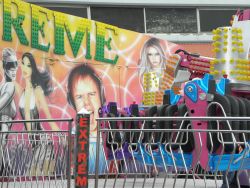 The Extreme ride cost half a million quid and will be up an running in time for the opening season in March 2010.

I’ve been down and had a look and my son and I are looking forward to trying it out when we next go to Bottons this year.

It’s good to see that Bottons keeps up with the times and gets in new rides. When we first came to Skegness in 2006 the Rocking Roller was their new ride.

I had to laugh when a 4 year old came off the Ghost Train in a huff, his grandad chased after him and asked what was wrong and the little boy shouted “It was Crap”.

If a 4 year old says the Ghost Trains crap you’ve got to listen :-)

One of the good things about Skegness Bottons Pleasure Beach is that they do get new rides in, unlike Fantasy Island in Ingoldmells that has had the same rides for years.