We had a wonderful time watching a unique performance of Charles Dickens A Christmas Carol in Skegness performed by the very talented StrangeFace Company, we absolutely loved the show. 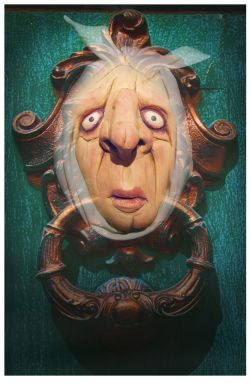 A Christmas Carol was performed with the StrangeFace actors wearing weird and wonderful masks, I’ve never seen a theater show like this before it was awesome. The masks made it so lots of Charles Dickens characters could be performed by a cast of just five players, yet because there was so many masks it made the show seem as though there was a cast of 20 or more. The StrangeFace actors did an excellent job in bringing to life each mask and making them individual, I’m surprised that this traditional art form isn’t used more in the theatre.

The StrangeFace actors must really enjoy bringing each mask alive, I thought they did a brilliant job portraying Charles Dickens classic A Christmas Carol to the Skegness audience! Their body language was different for each character and no two accents was the same, totally believable individual performances, it must be a lot of fun acting behind a mask. 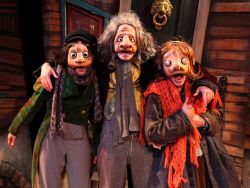 And if that wasn’t enough there’s also puppets in the play bringing yet another element of childhood glee to the audience. My favourite puppet performance had to be that of Scrooge’s partner Marley when he visits Scrooge to warn him about the three ghosts of Christmas past, Christmas present and Christmas future that will visit him that night, I was so enthralled in the puppet’s performance I barely noticed the puppeteers on stage

StrangeFace make the masks and puppets for their shows themselves and they are weird looking, we really liked them especially my son who’s artistic and has convinced me to make some at home and put on a small play :-)

I think the strange faces of the masks might be the reason that A Christmas Carol by Strange Face was for children 7+, small children might be frightened by the way the masks look, add that with the way the actors move in them and I can see why this age warning was wisely introduced, the characters are so believable you have to be able to tell the difference between fiction and reality.

The audience in Skegness gave a huge round of applause at the end of Charles Dickens A Christmas Carol, there was that many in the audience at the Imperial Ballroom that extra chairs had to be found! At the end of the show the kids and adults got the opportunity to try on the mask, unfortunately my son missed out on this because we had to leave straight away, but I though that was a great personal touch from the StrangeFace Company.

If StrangeFace comes to your town definitely go see them, their theatre productions are not to be missed amazing, fun and 100% entertaining, you’ll love it, the kids will love it and you’ll leave the show feeling happy, what more can you ask for?

Below is a promotional video from the StrangeFace Theatre Company for a play called The Last Resort (not one available for a Christmas Carol).

Would We Go Again : Yes
Would We Recommend To Others: Yes
Was It Value For Money: Yes
Recommended For: 7-100+ year old :-)